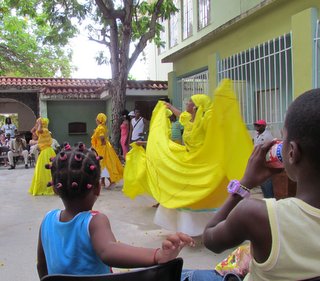 You’re going to Cuba? Great! Take food. That was the advice from friends when I told them about our upcoming trip. There was universal agreement that if we were going to survive for a whole week, my suitcase had to be half full of cereal, dried fruit and granola bars. Of course, this was a challenge in the making. Forget the groceries, I ramped up on research instead.
We built a Cuban sandwich of our own – a spicy weekend in Havana stuffed between four days at a luxurious all inclusive in Varadero. Add a helping of history, a pinch of the mystical and a dash of neighborhood dance party and we had a tempting trip so good we could taste it

Our first two days were spent at the Paradisus Princessa del Mar Resort & Spa in Varadero, out at the whip end of the long stretch of beach that marks the closest point between Cuba and Florida.  In the Royal Service section the ocean was only a few steps away, but those were hard steps to take when the mojitos and pina coladas were flowing at the swim up bar.  And the food?  It was fine – thanks to the recommendations of our personal go-to guy, William.  Each morning William would arrange our dinner reservations at one of the themed restaurants (Italian, French, Japanese, International or Oriental).  We found a massive buffet breakfast on the all-inclusive side with several omelette stations, notable pancakes (sweet and savory), fruit, pastries and memorable Cuban coffee.  We spent the afternoon at the lagoon sized pool and later that night, after a five course dinner at the Hill Top with table service and an impressive wine list, we wandered over to catch one of the nightly outdoor stage shows featuring an enthusiastic Tropicana-style dance review.

Early Saturday morning William put us in touch with Henry, the friendly co- owner of a Cubataxi, who was waiting to drive us to Havana. In about an hour and a half we pulled up to the Melia Cohiba, a five star hotel within a stone’s throw of the Malecon, Havana’s famous seawall stroll.  A good internet connection in Cuba is a rarity, but the lobby at the Cohiba is a definite hot spot; the 24 hour lobby bar serves a great mojito.  And the food?  The burger and fries at the Grill Aqua pool restaurant were definitely a 10.

We flung our bags into our spacious room, stopping to admire the city view from the 180 degree wraparound windows before heading around the corner to take in the show at El Gran Palenque- the national dance school.

Every Saturday afternoon in a shade dappled courtyard, a hypnotic blend of African-Cuban drumming and call and response announces that the Conjunto Folklorico Nacional de Cuba is about to start the Sabado de la Rumba.  Pulsating rhythms echo off the plaster walls as dancers dressed in brilliant yellow, red and blue dip and sway, pounding their bare feet on the cool limestone patio.  Hips shaking, eyes flashing, skirts swirling in the hot afternoon air, the women’s ensemble dancers give way to solos by the men.  In turn mystical, menacing and playful, they breathe life into the spirits of African dance. The first hour or so of the three hour non-stop performance is given over to traditional dances, the next hour features more contemporary but just as thrilling sets with some of the young members of the troupe showing incredible talent.  For the last hour, the audience, who have been twitching in their seats in anticipation, are invited up.  Dancers from five to eighty-five fill the dance floor, waving handkerchiefs or skirts, and surrender to the sounds of rumba.

Right around the corner from El Gran Palenque, on the second floor of a former mansion, is Atelier, a paladar, or home based restaurant.  The whitewashed walls are hung with contemporary art, the tables are set with individual sets of vintage china and glassware.  The menu, which arrives in English, offers a wide selection of appetizers like piquillo peppers stuffed with tuna and asparagus spears with gouda.  Main dishes cover the gamut from lamb, lobster, rabbit and chicken to Cuban specialities like Ropa Vieja, slow cooked shredded beef, at prices around $15 Cdn.

On Sunday we set off on a tour of Old Havana with our guide Abel from the San Cristobal Travel Agency part of the Office of the Historian of the City, an institution that is working to restore the oldest part of Havana.  During the walking tour we visited the four main squares; the Plaza Vieja, a gallery of architectural styles; the Plaza de Armas, the site of the first Castle of the Royal Guard and the Palace of the Captains-General, now a museum; the Square of St. Francis of Assisi with a tower view of the old town; and Cathedral Square, with its unique Cuban baroque style cathedral.  Photographers will be lost for hours in the mix of old and new, crumbling and restored architecture, the colorful play of sunlight and shadows on the narrow streets and the fanciful ironwork.  Museums, art galleries and souvenir shops line the streets as well as grand institutions like the Hotel Floridita, the home of the daiquiri, with its famous bronze statue of Ernest Hemingway at the bar.

The next morning after visiting the National Hotel, the former hangout of gangsters and gamblers and now an UNESCO World Heritage site, we found ourselves in a very unusual alley – Hammel Alley in Centro Habana just a few blocks away.  The Cuban painter and muralist Salvador Gonzalez has melded the religion of Santeria, a fusion of West African, Caribbean and Roman Catholic beliefs, with his art, to create a magical performance space that covers a city block.  A painted canyon of three storey walls, windows and rooftops is adorned with mystical symbols, literary quote and imagery of the sea and sorcery.   Under a small decorated overhang, a band lures the dancers, dressed head to foot in ancient African cult garb, into the crowded street to perform.  The practice of Santeria continues to this day, but it is a “kitchen religion” usually performed at home. The dances of Hammel Alley were as close as we could get without an invitation.

The ride back to Varadero seemed to drag us forward in time, away from the history and culture of La Habana Vieja and back into the present.  In our quest for good food we found that Cuba is a country that also nourishes the soul and we were more than satisfied. 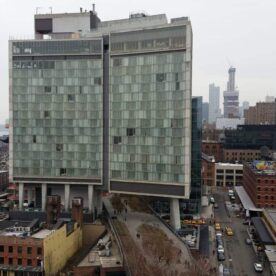 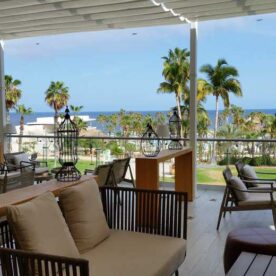 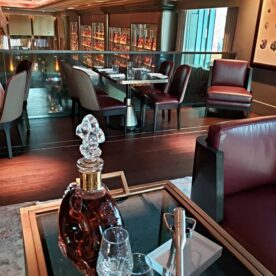 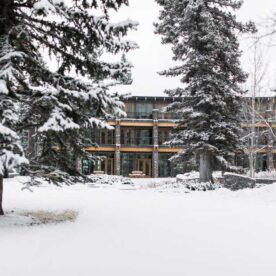 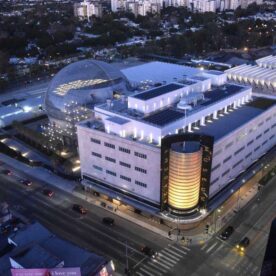