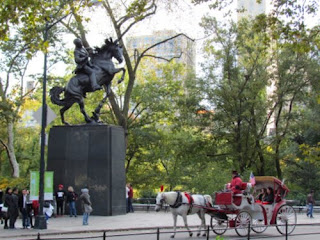 For AAA Home & Away Magazine, Southern Pennslyvania and online:

What would New York’s Central Park be without horses? Many of the park’s 40 million annual visitors would never guess that horses have played a major role in the history, art and culture of the park and that they continue to do so today.

The clippity-clop of horses hooves have been heard in Central Park since its official opening in 1857.  Designed by the famous landscape architects Frederick Law Olmsted and Calvert Vaux, the seemingly natural and idyllic vistas that enchant us today were sculpted out of hillsides with gunpowder and shovels.  Horses played their part by carting in thousands of feet of topsoil to create rolling green lawns, and hauling out millions of cartloads of debris to the countryside.  In a time before heavy machinery, their hard work helped to create over 840 acres of gardens, lakes and woodlands, crossed by 36 unique arches and bridges.

Olmstead and Vaux envisioned the park as a haven of relaxation to soothe the jangled nerves of 19th century city dwellers, but August Belmont, the founder the Belmont Stakes, proposed a racing oval “particularly advantageous for trials of speed, displays of horsemanship, and the like”.  The collision of the romantic and the sensational evolved into the bridle trails, pedestrian paths and carriage drives that skaters, bikers and pedestrians use today.

Carriages and horse owners have always been welcome in the park.  The first carriage fare was paid in 1859 to allow visitors to join well heeled New York society folk in the daily afternoon promenade.  According to Sara Cedar Miller, historian of the Central Park Conservancy and author of “Central Park, An American Masterpiece”, “It’s perfectly legal. If you have a horse in your apartment, you are welcome to bring it to the park and ride it anytime you like.”

Amazingly enough, there is something like an apartment block for horses, the Clinton Park Stables on West 52nd Street, one of four stables in the city, where 78 of the city’s 220 carriage horses bed down every night.  An unconventional stable by most standards, the bright, airy three storey brick building is a perfect fit for these city horses. Their feed is a mix of corn, alfalfa and sweet oats that looks like a breakfast cereal from Whole Foods and they follow an active but carefully monitored and logged routine that includes regular vet visits, special horseshoes, dental care and 5 weeks of legally mandated vacation each year in Pennsylvania.  They work on alternate days and only when the temperature is between 18 and 90 degrees F.  The average New Yorker might envy their lifestyle.

Another team of horses in the Park spend their days protecting the public – the 6 equine officers of the Mounted Parks Enforcement Patrol.  Along with their human partners, they patrol over 14 miles of beaches, tennis courts, skate parks, stadiums and hundreds of individual parks.

Officer Sgt. Lori Knowles of the NYC Mounted Parks Enforcement Patrol calls herself “a State certified Peace Officer with horse fever”.  Justly proud of her four legged officers, she says, “They are trained to deal with all kinds of people from demonstrators to lost kids. A typical 8 hour day might include lots of human interaction – a parade, an event or a race.”  Each horse receives twice yearly training to develop the temperament that is necessary to deal with a wide variety of situations.  “We’re looking for a horse that is not a sissy, but not hot-blooded either.  We depend on each other and they become our eyes and ears,” says Officer Knowles.  Two horses who are well known and often photographed in Central Park are Monte and Pete.  Monte is a 14 year old Percheron draft horse who loves to be petted (just not on the face when he’s on duty please!).  Pete started his career pulling carriages for the Amish.  “He’s a he-man of a horse, but he can get mushy too”, says Officer Knowles. (Note: both Monte and Pete have retired since this story was published.)

Riders in the Sky

Finally, there are the horses of Central Park who never leave their posts.  General William Tecumseh Sherman, on his horse Ontario, his cape suspended in the wind, follows winged Victory, forever facing south on the horseshoe-shaped Grand Army Plaza. Re-gilded in 23.75 karat gold leaf in 2013, this masterpiece by Augustus Saint-Gauden shines as proudly today as the day it was completed in 1903.

Farther west along Central Park South, at the head of the Avenue of the Americas, are the magnificent equestrian statues of a trio of Latin American leaders, José de San Martin of Argentina; José Julian Marti, the Cuban patriot; and Simon Bolivar, liberator of Bolivia, Panama, Columbia, Ecuador, Peru and Venezuela from the Spanish.

Most beloved of all might be the horses of the Central Park Carousel, a folk art fantasy by the Russian artists Sol Stein and Harry Goldstein. Rescued from a trolley terminal at Coney Island in 1950, these beautiful “flying horses” continue to delight children and their parents, in the fourth incarnation of the merry-go-round since 1871.  Long may they gallop – all the horses of Central Park.

For information on Central Park visit www.centralparknyc.org or www.nycgo. Contact an AAA Travel agent and be sure to visit www.AAA.com to plan your trip to New York City.